The town of Andahua (3,560 meters above sea level) has a modern square ornamented with cypresses pruned into diverse animal and object forms, as well as an austere mestizo baroque style church. The characteristic twin volcanoes Huanacaure can be observed in the outskirts, and at a short distance, the narrow and deep Paccareta crack where the river runs to the Pumajallo Lagoon and Waterfalls.

The Andahua zone, a picturesque countryside characterized by its crops of potatoes, ollucos, habas (broad beans) ocas, etc. sits on ashes and lava. It is strategically located in the mid center of the valley, where the pedestrian or livestock roads and the roadways to Arequipa via Viraco and Majes, or via Caylloma and Colca converge, as well as the roadways to Chachas, Ayo and the planned highway to Humbo (Colca Canyon) a future important tourist center that is currently being implemented.

The ruins of Antaymarca, an interesting archaeological site fundamentally constituted by structures with underground chambers which were possibly tombs, though the zone is still under research, can be visited towards the south; as well as the Kanalla-Mauras volcano, where a bull-ring has been built inside its crater; the Soporo mirador, from where it is possible to watch a suite of volcanoes: the Chilcayoc, the Jechapita and big lava tongues, the Chachas Lagoon and the Chila mountain range can also be observed.

Some Arunis archaeological remains can be visited in Soporo, among which stand out the domestic architecture, tombs and chullpas (mausoleums) and where rooms, patios and lanes communicating with dwellings can be appreciated. Furthermore, the road offers diverse flora and fauna species, especially birds, among which 44 of the 76 species existing in the valley have been identified.

ORCOPAMPA
Located to the north of Andahua, Orcopampa (3,900 meters above sea level) is nowadays the most important commercial and mining center in the zone; it is surrounded by picturesque towns like Chilcaimarca, Chapacoco, Tintaymarca, Huilluco, the thermal baths of Huancarama and the spectacular Panahua ravine, with waterfalls frozen most of the year.

The Orcopampa mine has implemented an interesting ecological park with vegetation and bird species, camelids and local deer, and there is also a small Municipal recreational lagoon.
CHACHAS
The pedestrian track to the Colca Valley passes through Chachas, a picturesque agricultural area located over 3,000 meters above sea level. The village has a beautiful church on the shore of a lagoon, whose waters flow underground because the exit was covered by lava from successive eruptions, and they surface again 17 km to the south, in the Mamacocha Lagoon.

AYO
This small village (1,990 meters above sea level) of about 400 inhabitants is one hour and a half from Andahua. The Ayo valley is rich in agriculture, with fruit plants (avocados, peaches, apples, figs, grapes, quinces) maize, potatoes and broad beans for self-consumption and it produces wines, piscos and grape hard liquors. It is surrounded by wild vegetation with very interesting species like the “jarilla”, used in craft works, the huarango (Prosopis pallida) and the carrizo (Arundo donax). The wild vegetation consists mostly of column shoot cacti in a desert area reaching the Colca Canyon in the deepest zone.

The Ayo square is big and has a 17th century church. The main attraction of the region is the Mamacocha Lagoon, with crystalline waters of a deep blue color, fed by the Andahua river that is lost after the Chachas Lagoon. It is an oasis amidst lava formations, with a riparian vegetation dominated by willows, molles, carrizo and fig trees. Cacti and diverse bushes can be observed on the slopes and the lagoon is the habitat for atherines and a small population of otters known as huallaques, of a special scientific interest.

The andenerías (terraces) of Jello Jello, presumably the most important of the zone, and many remains of the ancient inhabitants are found before arriving at Ayo.

CHILCAYMARCA
At 3,850 m.a.s.l., this town still preserves its cobblestoned streets and its traditional thatch-roof houses and has become a tourist center. It hosts a Tourist Hotel and accommodations to do community tourism, a lookout with a great and ample view, interesting rock formations at Puca Sala and neighboring towns such as Chapacoco and Huilluco that boast excellent craft workers, in particular potters, with ancient traditions.

The mining development of the region has encouraged the improvement in communications. Nevertheless, it is necessary to bear in mind that the roads are still graveled and muddy during the rainy season, which makes it advisable to use 4x4 vehicles.
The town of Andahua has a small hotel implemented in an old big house, while in other villages there are lodgings in municipal shelters as in Ayo.

There are two road ways to reach the Valley of the Volcanoes. One can take the Arequipa - Majes Valley - Viraco - Andahua or choose the Colca Valley - Caylloma -Orcopampa - Andahua one. Another possibility is taking charter flights in small airplanes. Finally, for the more adventurous travelers, there is a route of old pre-Incan pedestrian tracks that goes from Cabanaconde, in the Colca Valley, to Chachas and Andahua, or from Huambo to Ayo. This trekking may take about four days.

Once in the town of Andahua, one can choose between two different roads to visit the region. The first covers the Orcopampa and Andahua area, 33 km by road (approximately for an hour) and the second goes from Andahua to Ayo, about 37 km towards the southwest (for about two and a half hours).

This route is advisable when going to the Valley of the Volcanoes and enables visiting the Salinas National Reserve and Aguada Blanca and the Colca Canyon; additionally it helps in adapting to the altitude, most of all if one spends the night in the Colca Valley.

The road crosses Yura or Cabrerías, depending on the interest of the travelers, then crosses the Salinas and Aguada Blanca National Reserve and the Cañahua and Toccra pampas, where it is possible to stop and contemplate the rupestrian paintings of Sumbay, about 4,000 years old. Groups of vicuñas and herds of llamas and alpacas can be seen along the way, as well as some wetlands with abundant high-Andean birds. The main volcanoes of the region –Misti, Ubinas, Chucura– and the Chila mountain range, where the Mismi, Hualca-Hualca, Sabancaya, Ampato and Chachani stand out, are seen when passing Patapampa (4,800 meters above sea level). The journey covers about 160 km from Arequipa to the village of Chivay, capital of the Colca Valley.

Immediately thereafter, one heads down the Canyon towards the Valley of the Volcanoes, leaving Chivay in the direction of Sibayo and passing along the village of Tuti, 20 km away. In the vicinity of the Sibayo bridge there is a detour leading to Caylloma. Another possibility is passing Tuti and taking a detour along Ran Ran in the direction of the Nevado Mismi, whose peak is the origin of the Amazon River. Even though this is a shorter route, only 4x4 vehicles can take it, because it is just a simple track. From there it goes on towards Caylloma and joins the Caylloma-Arcata road in the vicinity of the Caylloma mine.

Sibayo (3,800 meters above sea level) is an interesting camelids breeding zone, apart from being the best preserved village of the Colca Valley, with its houses built from river rocks, boulders of many colors, thatched roofs and a beautiful colonial church. Even if the main square and the city hall have been modernized, the architectural style of the village has been preserved.

The ascent keeps on towards Caylloma, passing the Hornillos River in the vicinity of Monigotes. This route takes travellers towards a big ravine of extensive wetlands, where numerous herds of llamas and alpacas and even some wild vicuñas may be seen. Before crossing the bridge that takes to the village of Caylloma there is a detour to the right that crosses the Apurímac River and leads to the Sukuitambo mine. The road goes on along a beautiful canyon up to near Yauri, Espinar, the zone where the Tintaya copper mine operates. On the Apurímac banks there are numerous large, round-shaped rocks or the remains of several trapiches, the name given to the colonial mills they used to crush the minerals.

Caylloma (4,319 meters above sea level), about 90 km from Sibayo, was a very important center due to the mining activity and became the capital of the Province of Caylloma for some time. The colonial Caylloma mine, from where silver is mined today, is a few kilometers from the village.

Leaving behind the detour towards the Caylloma mine, the Nevado Mismi (6,037 meters above sea level) may be seen in the vicinity of the Huarharco River. The road runs along the mountain range, between 4,400 and 4,800 meters above sea level, and the typical altiplano landscape, many llamas and alpacas herds, wild vicuñas, vizcachas and some ducks in wetlands or bofedales and small lagoons appear. Then one takes the detour towards the new Ares gold mine and the Carhuacocha Lagoon is seen below. At a short distance from the detour one can take the road to the left, leading to Orcopampa. Along the right road, one can reach Ayacucho going in the direction of the Arcata mine, which produces silver in good quantities.

After 195 km from Chivay and descending from 4,500 to 3,800 meters above sea level (about six hours journey) one arrives at the town of Orcopampa, where the Valley of the Volcanoes starts. The road passes along Huancarama, where there are comforting thermal baths.

The village of Andahua is 387 km from Arequipa via Chivay and the journey takes about nine hours. If one prefers, it is possible to travel directly from Arequipa to Sibayo, shortening the journey in about 50 km.

It is advisable to take this route when going towards the Valley of the Volcanoes or back to Arequipa, to wander around the picturesque villages of Viraco, Tipán and Pampacolca, and to visit the Majes Valley and its many attractions.

The route passes at the foot of the big Coropuna volcano, along a gorge located at 4,900 meters above sea level, to descend to the picturesque villages of Machaguay, Viraco and Tipán, located between 3,600 and 3,200 meters above sea level and from where there are spectacular countryside views. It is recommeded to make a detour of 22 km and head towards the village of Pampacolca to visit the archaeological center of Maucallacta, where the most important Inca remains of the region can be seen.

The route, which keeps on descending along a road always graveled, narrow and winding, passes along Ongoro, a good place for canoeing, to reach the Majes Valley. After leaving Aplao behind and a small detour towards the village of Huancarqui, the roadway to Arequipa is paved.

It is advisable to spend the night in any of the Majes Valley hotels and visit the wine and pisco wineries of the region, and, during non-restriction periods, savor the extraordinary shrimps of that river. Likewise, one can visit Querulpa, where there are prehistoric animal traces and then go on to Toro Muerto, an important archaeological site with more than 6,000 petroglyphs.

The journey to Arequipa passes along the Majes irrigation and crosses the Siguas and Vítor Valleys; it is possible, depending on the available time, to visit any of the colonial time wineries of wines and piscos.

The village of Andahua is about 340 km from Arequipa, which takes around 7 to 8 hours on 4x4 vehicles. 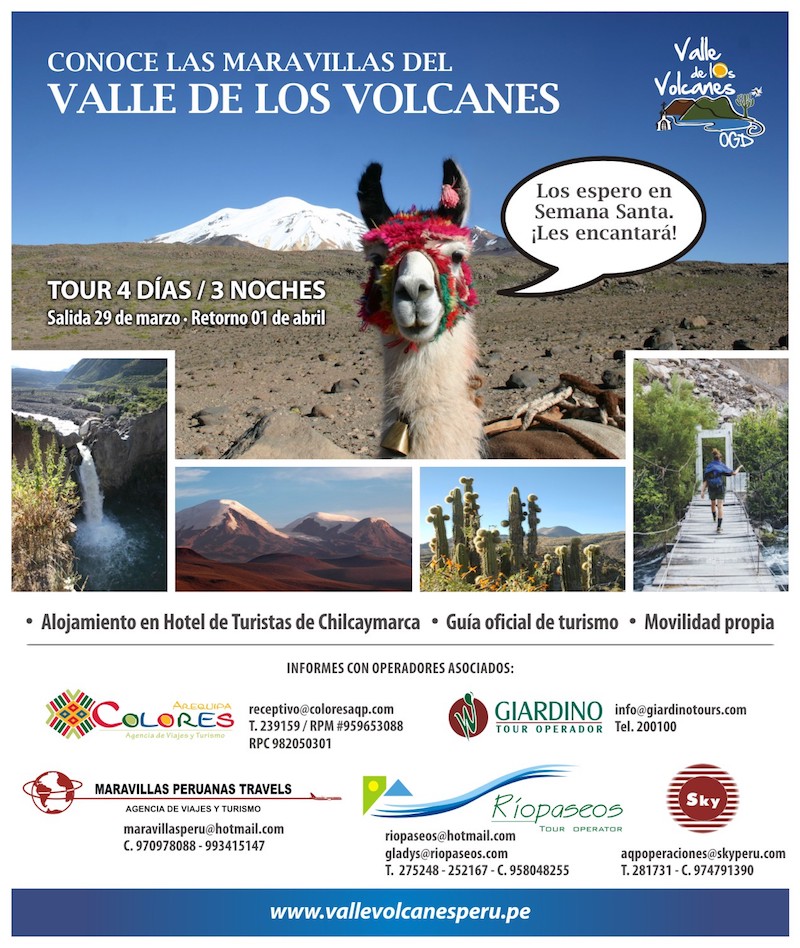